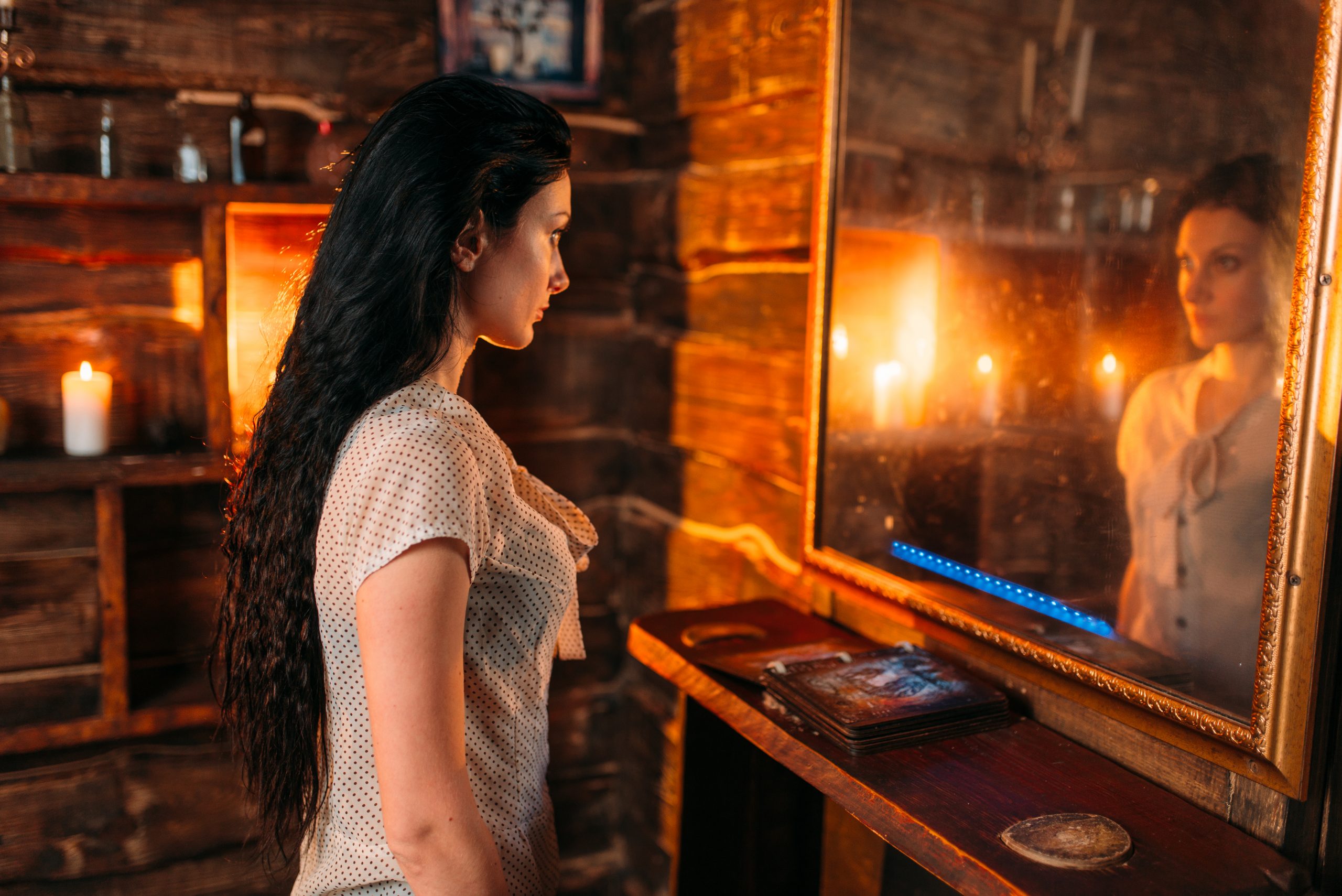 A paranormal investigator doesn’t have to wait for Halloween, when the veil between this world and the next is at its thinnest, to make contact with ghosts and goblins. For them, every day is Halloween. But unlike Halloween, the spirits they deal with don’t wear masks, and they’re invisible, so they’re not as easily identifiable as the ghosts and goblins who come to the door seeking treats. They behave badly. Some will scratch you creating welts on your skin; some will push you down the stairs; some will throw a table and chair or two; some will pull hairs; others can make you ill.

So let’s put it this way: these ghosts and goblins aren’t looking for candy, folks. And unfortunately, if you investigate long enough, you’re sure to encounter a few of these beings who can make their presence known in potentially dangerous ways.

I guess you could say it’s an occupational hazard.

So, who are these malevolent spirits? From where did they come? Why are they here? And how can we deal with them?

The first group that can create havoc with humans is the dead who have crossed over. And this is based on the premise that we can actually make contact with the dead. Using technology like spirit boxes and SLS cameras designed to assess these things, it would appear that we can. We know we’re making contact with something having intelligence because they answer questions, and these intelligent answers frequently claim to be the spirits of the dearly departed. So, if we take them at their word, that’s who they are. But, unfortunately, some of the departed aren’t so ‘dear.’

All of this begs the question: What happens to us when we die? The world’s greatest religions have attempted to answer this question, so it would be arrogant at best to risk answering it here. But there’s a theory that when someone dies, they maintain the same personality when they cross over as they had when they were living. That’s our working model for the purpose of this article.

Simply stated, if a person was kind while alive, they would remain kind after death. The same holds true for the mean-spirited (pun intended): if they were mean and vicious when they were alive, they don’t suddenly become virtuous angels at death. Their soul remains mean and vicious, which makes them who they are. And like most hateful people, they have unresolved issues that keep them that way. These are the ghosts who can raise havoc during an investigation with behavior so hostile and potentially dangerous that they can be mistaken for the demonic.

I am reminded here of the ghost of Ed Gein. Although not as well known as Ted Bundy, Gein was a serial killer who earned the moniker The Butcher of Plainfield for obvious reasons. His heinous acts became the inspiration for three movies: Psycho, The Texas Chain Saw Massacre, and The Silence of the Lambs. Like Norman Bates in Psycho, he had an unhealthy devotion to his mother. But Ed also had a penchant for decapitation, cutting off body parts, and necrophilia. He liked to keep his victims’ organs in jars and made chairs, masks, and lampshades with their skin. He also robbed graves, presumably using the corpses to implement more bizarre interior design ideas. His home was one of the most gruesome crime scenes in American history.

For a Shock Docs documentary, documentary film producer and paranormal investigator Steve Shippy and world-renowned psychic medium Cindy Kaza traveled to Gein’s hometown, Plainfield, Wisconsin, to conduct investigations of the numerous hauntings there attributed to Gein. And it was a bit like kicking a hornet’s nest. Allegedly, the Hardware store where Gein killed one of his victims, the jail, and the property on where Gein’s house once stood, are all haunted. In addition, one man who purchased a knife he was told was one of Ed Gein’s murder weapons had to remove the item from his house because of the paranormal activity it created there. Everything around him died: his pet birds, his animals, his mother, his father, and his wife, and he attributes the deaths to Ed Gein’s ghost. So, I think it’s fair to say Ed Gein was not a nice man either in life or in death. He was still being himself, murdering people from beyond the grave.

Ed Gein is an extreme example of what ghosts can do to the living. And it’s rare. But, as an investigator or layperson, it’s still good to know that the depths of depravity you uncover and deal with can retaliate drastically. Mostly what we find, though, are ghosts acting up who manifest paranormal activity that is the result of angry or confused spirits who are not even aware they are dead. But then there are some spirits who are aware they are dead but are angry about it, and some are out for revenge for wrongs they think were committed against them. And since they do not benefit from things like anger management classes on the other side, as we can here, they default to some of the same behaviors they used while living. Even if it means making someone so ill they die.

And then we have demons…

Then came more movies based upon true stories of demonic possession, like The Exorcism of Emily Rose, who died due to her possession and exorcism. The priest who performed the rite was then tried and convicted of murder but set free on time already served.

These peeks into the demonic world were followed by more books, this time documented by actual exorcists of the Catholic church. Fr. Gabriel Amorth, Chief Exorcist of the Vatican; Fr. Jose Antonio Fortea; and Fr. Malachi Martin, who was released from some of his Jesuit vows and moved to New York to write, further corroborated evidence of the demonic functioning in the world, seemingly with little restraint. After an exorcism in 1999, Fr. Martin told a friend that an invisible force had pushed him down the stairs, leading to the head trauma that eventually led to his death.

Lay people like the Demonologist husband and wife team of Ed and Lorraine Warren were soon thrust into the limelight, too, with their investigation of the demonic activity that eventually became known as The Amityville Horror. Others like John Zaffis and Ralph Sarchie, who were both trained by the Warrens, soon expanded the field. And with interest in the paranormal continuing to grow, demonologists are added to the paranormal roster almost daily.

So, according to these esteemed demon slayers, evil is alive and well on planet Earth. But how did demons get here?

What is a Demon?

According to Christian theology, demons were once angels that rebelled against God and hence, were hurled out of heaven. According to scripture, one-third of the angels, led by Satan, now roam the Earth “as a roaring lion goeth about, seeking whom he shall devour.” – 1 Peter 5:8.

These fallen angels were never human, and they are bent on destruction. God is their enemy. Because we are allegedly made in God’s likeness, we are also their enemies. They may have lost their status in heaven, but they still possess those angelic powers that can appear miraculous to the living.

Whether their origin story is true or not, exorcism, based upon Catholic rite and theology, gets rid of them most of the time. That in itself says much. So, we’ll accept it the same way we see tree branches move by an unseen force and attribute that activity to the wind.

Although possession is a demon’s ultimate goal, it doesn’t occur overnight. Instead, it’s a process with four clear behavioral stages, according to Fr. Gabriele Amorth:

A competent deliverance minister or layperson can address the first three stages. The first stage, which most investigators are called to deal with, has been known to respond to house blessings and smudging with sage, although these can sometimes agitate the demons and increase activity. However, the last stage is reserved for official exorcists.

One caveat concerning demons: they cannot attempt to influence humans unless they are first given permission, and that, according to Fr. Malachi Martin, can happen by opening doors through occult practices like using an Ouiji Board.

How to Tell a Human Spirits from the Demonic

As a general rule, human spirits have less power than demons, so the physical manifestation of their presence is usually less intense than a demon’s. But like demons, they can exert physical influence by pulling hair, pushing, and even making someone feel ill. They can also move small objects, like items on a dresser, or they will move a chair or other light piece of furniture but only a few inches. You’ll hear their footsteps and voices.

A good rule for identifying a dark human spirit is by simply asking them via a spirit box or digital voice recorder.

On the other hand, Demons will take that piece of furniture and throw it across the room instead. Footsteps become a marching band, such as in The Amityville Horror. Foul odors and substances can materialize. Instead of voices, you will probably hear growls or profanity and blasphemous speech. There may be levitation of people and objects. And they usually become more active around 3 a.m.

Still, if you doubt whether a spirit is human or demonic, provoking the entity with a religious icon or using holy water are the ultimate tests for identification. Demons always have an aversion to religious objects and can become outraged when presented with them.

In short, Demons are like the darkest human spirits on steroids, and it can be challenging to differentiate between the two at times. But with just a little investigation, you’ll be able to tell the difference.

With the proliferation of ghost-hunting TV shows and the acceptance of the paranormal by a wider audience, the study of demonic activity has found its way into academia and even graduate school. Here are only a few links to papers in professional journals to further your understanding of the demonic: