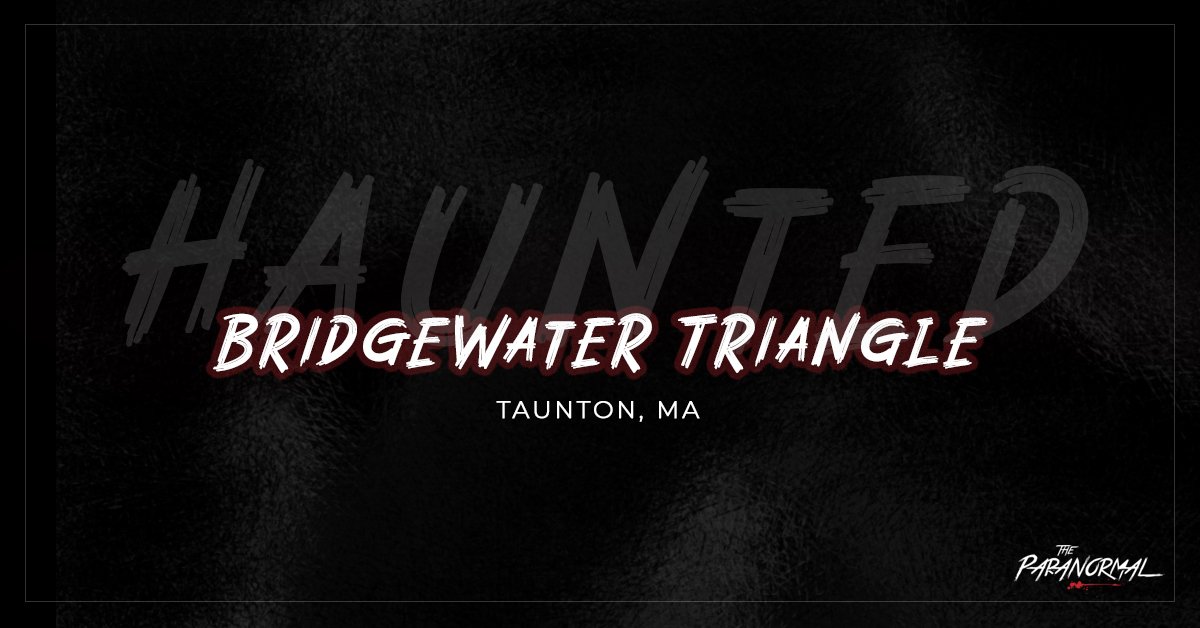 Thirty miles south of Boston lies the mysterious “Bridgewater Triangle,” a 200-square mile “vortex” that’s rumored to be both haunted and cursed. The triangle’s traditional borders are revealed by connecting the dots between Abington to the North, Freetown to the Southeast, and Rehoboth to the Southwest, encompassing some or all of the towns, including:

It also includes the 5000-acre Freetown Forest and 17,000 acres of wetlands called Hockomock Swamp, known as the ‘beating heart’ of the triangle. It is one of many reasons the Bridgewater Triangle is one of Massachusetts’s five most haunted places.

“Hockomock” is Algonquin for “The place where spirits dwell.” The name could not be more apropos since the swamp is one mass graveyard, the result of King Phillip’s War and the bloodiest battle in American history.

Over the years, there has been an unusually high volume of murders, satanic rituals, hauntings, bigfoot sightings, cattle mutilations, UFO sightings, orbs, strange curiosities, and all manner of strange cryptozoological encounters.

However, it was not until the 1970s that cryptozoologist and researcher Loren Coleman carried out paranormal investigations in the area and interviews with witnesses, then put the research results together and connected the triangulated dots. As a result, a distinct geographic triangle emerged, which he dubbed “The Bridgwater Triangle.” His book of the same name became the definitive work on this parcel of paranormal property and redefined southeastern Massachusettes as a supernatural hotspot. Let’s take a look at some of them.

In November of 1978, the body of 15-year-old cheerleader Mary Lou Arruda, abducted from Raynham the previous month, was later discovered tied to a tree in the forest. James M. Kater of Brockton, previously convicted of kidnapping in 1967, was tried for the murders and found guilty. However, both convictions were reversed on appeal based on witness testimony under hypnosis. A 1992 trial ended in a mistrial before Kater’s final conviction in 1996. He died in prison 38 years later.

Three more murders occurred in the forest, including the murder of a transient who was mistaken for a police officer. Two men were also shot to death on Bell Rock Road.

Retired Freetown detective Sgt. Alan Alves said that for 15 to 20 years, he witnessed evidence of regular satanic cult activity in the forest beginning in the late 1970s and continuing into the early 90s. He and other officers would regularly find ritually sacrificed animals drained of blood. In addition, they would often find satanic graffiti like upside-down crosses and pentagrams.

Alves said police believed the infamous Fall River cult murderers Carl Drew and Robin Murphy conducted rituals in the forest while living in a hut. Alves also said police found an underground bunker with creepy dolls believed to belong to a satanic couple who were prosecuted for molesting children they had adopted.

Solitude Stone is an inscribed stone near Forest Street in West Bridgewater, where nearby a missing person’s body was found dead from an apparent suicide. The rock became known as ‘suicide stone’ and was found with the following inscription: ‘All ye, who in future days, Walk by Nunckatessett stream Love not him who hummed his lay Cheerful to the parting beam, But the beauty that he wooed.’

Hockomock Swamp is a wet, soggy place of approximately 17000 acres and the ‘beating heart of the Bridgwater Triangle. English colonizers called it the ‘Devil’s Swamp’ because of its strange activity. Orbs of light reportedly flit and float over the swamp during the early morning hours and just before the sun sets. EVPs abound here, making it one reason why the Bridgwater Triangle is one of the five most haunted places in Massachusetts.

During the seventeenth century, the Hockomock Swamp was used as a fortress by the Wampanoag tribe against the invasion of English settlers who thought the swamp useless, barren land. The Wampanoag of the region placed a high value on the swamp and respected it as it had provided them with years of game. They also used the swamp as a sacred burial ground.

The English-Indian soldier John Alderman shot and killed King Philip or Metacom, chief of the Wampanoag Confederacy, on August 20, 1676. King Philip was hung, beheaded, drawn, and quartered, and his head was placed on a spike and displayed at the Plymouth colony for two decades. According to legend, the land is cursed because of this. Orbs, spirit lights, and UFO sightings have plagued the area since the 1970s. Apparitions of American Indians are common occurrences.

Big Foot sightings increased in number during the 1970s, mostly from reputable reporters like police and newscasters. For example, on April 8, 1970, two officers were parked in a police cruiser near the Hockomoke Swamp. Suddenly, the car’s rear end was lifted into the air and dropped with a loud and disturbing bang. Both officers quickly spun the car around, training their spotlight on something large and hairy resembling a bear as it ran upright on two legs behind a house. Unfortunately, despite a thorough search of the area, no bear or other creature was ever found.

One woman from West Bridgewater heard a noise in her yard during the evening. Looking out her window, she saw a large bipedal creature eating one of the pumpkins from her garden. The hairy animal looked at her, then took the pumpkin into the woods with a grunt.

Numerous books have been written about the Bridgewater Triangle, documentaries made, and countless paranormal investigations performed by local and national groups. It’s a perplexing piece of land, heavily documented and researched by some of the top paranormal investigators in the business, including newscasters and law enforcement, for some added credibility. But what is it?

Is it a vortex, a location that seems like a tear in the veil of other realities? Is it the embodiment of a cursed legacy forged by centuries of brutal treatment and meaningless treaties designed to cheat the natives of what was rightfully theirs? We don’t know.

What we do know is that the amount of paranormal activity here, the variety of experiences, and the intensity of its manifestations are unequaled in the state, making it easily one of the five most haunted locations in Massachusetts.