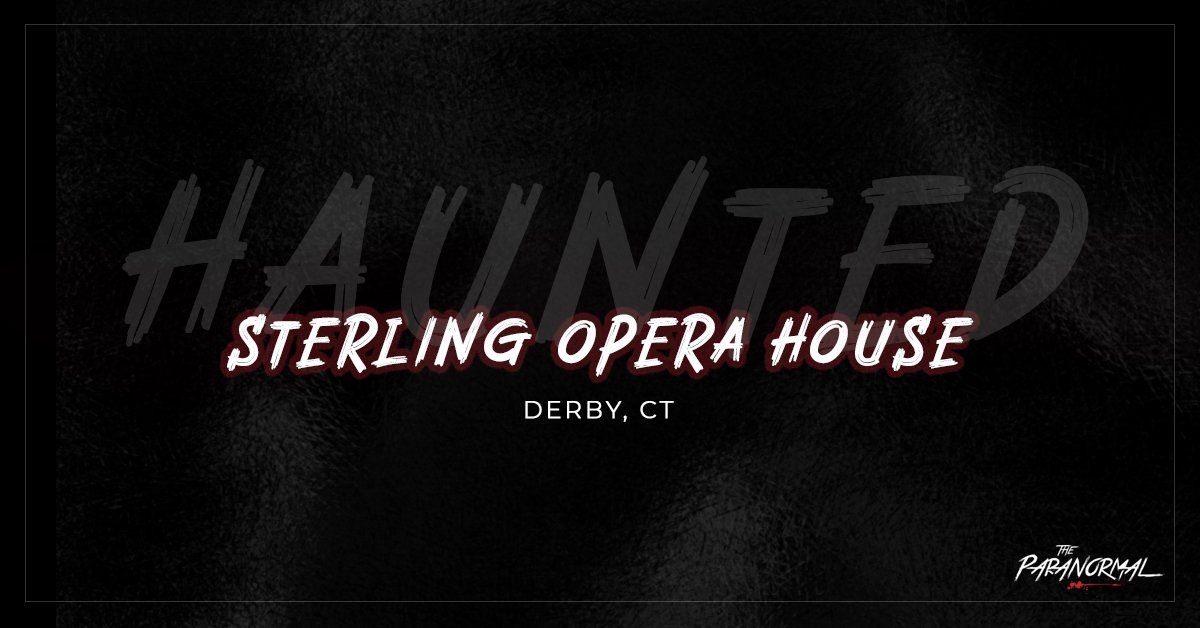 Eight miles northwest of Hartford is one of the oldest opera houses in the United States, The Sterling Opera House in Derby, Connecticut. It’s been vacant for over 60 years, but during its heyday, performers like George Burns, Bob Hope, Red Skelton, Lon Chaney, the Barrymores, Enrico Caruso, and even John Phillips Souza graced its stage. Houdini performed here as well and had a trap door constructed into the setting to ‘help’ him escape.

The list of vaudeville legends who performed here is endless. It was an entertainment mecca for anyone in show business, and movie premiers were also held here. Some of the performers hired help, and audience members liked the opera house so much that they never left, which is why it’s one of Connecticut’s five most haunted places.

Completed in 1847, the opera house was named after Charles Sterling, the renowned piano manufacturing company owner. It was designed in the Italianate Victorian style of architecture, and its acoustics rivaled New York City’s Metropolitan Opera House. The seating plan, which some say was influenced by the composer Richard Wagner, enabled all theatergoers to have unobstructed stage views.

It was the first structure in Connecticut to be listed in the National Register of Historic Places in 1968. In addition, the first national convention of the Purple Heart Association was held here. So this opera house has experienced a mammoth’s share of civic and entertainment yore.

Despite being a preeminent star-studded entertainment venue, the Sterling Opera House closed in 1945. The town acquired it and used it as a city hall, with its lower levels becoming a police station, jail, and fire department. By 1960 it closed for good, and it’s remained abandoned for the past 62 years. However, renovation efforts to restore the opera house to its original glory are ongoing. And these renovations are provoking some ghostly inhabitants to make their presence known.

Unlike other haunted locations worldwide, the Sterling Opera House has no tragic lore attached to it. Instead, the ghosts that live here -and there are many – simply like the place and don’t want to leave. Some were entertainers, some were audience members, and some worked behind the scenes.

Though the opera house is not open to the general public due to ongoing restoration, many paranormal investigators, including the SyFy channel’s Ghost Hunters, have received special permission to conduct professional investigations. As a result, the documented findings are considerable, making the Sterling Opera House one of Connecticut’s five most haunted places.

Charles Sterling, for whom the opera house is named, died two years before the opera house was completed. Some feel the departed Mr. Sterling is the cause of much of the activity, but “Andy,” the little boy’s spirit, is confirmed to be the most active. For Andy to play with, balls and toys are left around the opera house, and he’s known to roll them around when asked. Multiple investigators have also recorded EVPs of a young boy singing. Toys get rearranged.

As for Charles Sterling, he’s been seen on the balcony with a woman dressed in a long flowing period dress beside him. Most think it’s the ghost of his wife.

Other investigations here have revealed a woman in a sparkling evening gown, a woman in a teal dress, a woman in white with long blonde hair, numerous shadow people on the balcony, and a gentleman dressed in period garb.

One paranormal investigation team was able to capture the following EVPs clearly:

Investigators frequently see and communicate with a woman affectionately called “The Green Lady” because she appears in a long green dress. According to The Green Lady herself via spirit box, her name is Hattie, and she hails from Brooklyn but worked at the opera house.

Another frequently viewed phenomenon is a glowing white light that comes down the central staircase as if walking, then ‘walks’ back up the stairs again.

Images of spirit mists and orbs are frequently caught on camera. One picture shows the spirits of a woman and a child in Victorian-era dress.

One of the reasons the Sterling Opera House is one of the most haunted locations in Connecticut is the prevalence of full-body apparition sightings. These sightings are the rarest among the paranormal community but are also the most sought-after, mainly because they’re as close to a living human being as a dead person can get. And because it takes an extraordinary amount of energy for a full-body apparition to manifest, only some spirits are capable of rising to that challenge.

This area of the opera house is described as the scariest. Basements can be spooky whether they’re haunted or not, and a sub-basement is even more so. Footsteps are heard here, thumps, people are touched, EVPs, and one man received three deep bloody scratches to the back of his leg.

Even the Mayor of Derby has experienced the paranormal here.

Spirits don’t like their environment being disturbed any more than we do. So, The Sterling Opera House’s resumed restoration will undoubtedly reveal more paranormal activity as the renovations continue. With special permission, investigators can access this most haunted place in Connecticut and see for themselves.