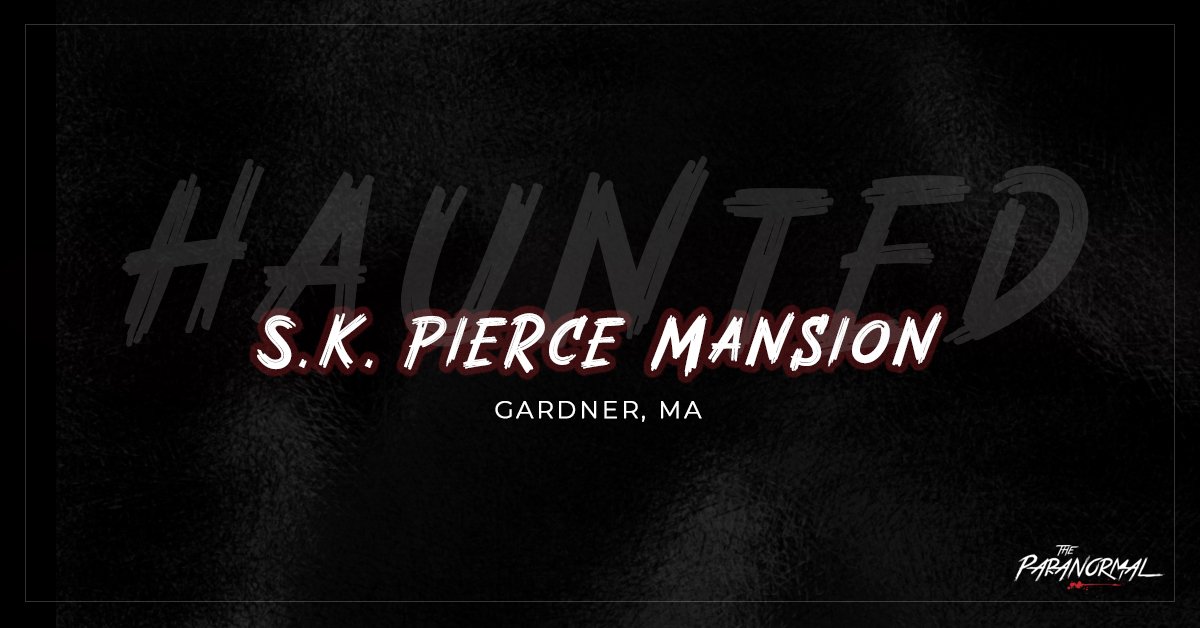 When Edwin Gonzalez and his wife, Lillian Otero, bought the S.K. Pierce Mansion in 2009, they were looking forward to moving from Boston’s big city life to a quieter and gentler existence. They didn’t believe in ghosts, and although the Mansion had been left vacant for decades and was in various states of disrepair, but still with enough ghoulish charm to be a vacation home for the Addams family. But by 2011, their perspective on the supernatural changed.

By the fall of that year, they were forced from their dream home, narrowly escaping with their lives due to the amount of uncontrolled paranormal activity they experienced.

Sylvester Pierce, the Mansion’s builder, made his fortune as the owner of the S.K. Pierce and Sons Furniture Company. And his success contributed significantly to making Gardner, MA, renowned throughout the east coast as the ‘chair city.’ Moreover, he made sure the home he built for himself, his wife Susan, and their son was an architectural and cultural marvel for its time, befitting a man of his stature.

Built in 1875, the nearly 7000 sq ft Victorian took 100 men a year and a half to build and boasted ten bedrooms. Painstaking detail was used to create every inch of the hand-carved moldings and cornices that are seen throughout the home. The illustrious guest list included the likes of former President Calvin Coolidge, Minnesota Fats, Bette Davis, P.T. Barnum, and Norman Rockwell. It also served as a prominent meeting place for the Freemason Society. The future was bright for the Pierce family, and all was well…until it wasn’t.

Just weeks after moving into their dream home, Susan Pierce succumbed to a mysterious bacterial illness. Father and son were devastated, but after a year of mourning, Mr. Pierce married a young woman named Ellen, who was 30 years his junior. She bore him two more sons but passed away in 1888, leaving the house to his new wife and three sons.

By most reports, the sons constantly bickered over everything, including ownership of the house and the business. As the Great Depression approached and people didn’t have the cash flow to purchase high-end furniture anymore, the chair industry suffered. And so did S.K. Pierce and Son’s Furniture Company.

In an attempt to sustain the Mansion, S.K.’s youngest son, Edward, took control of the house and transformed it into a boarding house that attracted all sorts of unsavory characters with penchants for drinking, gambling, and prostitution. The murder of a prostitute is said to occur here, strangled in the red room on the second floor.

An incident of spontaneous combustion in 1963, whether legend or fact, was responsible for the death of a Finnish immigrant names Eino Saari, who was burned to death in the master bedroom. His body seemed to be the source of the fire as nothing else within the room showed any fire damage, including the bed upon which his charred body was found.

Six and possibly seven people died in the Mansion over the years, most of them family members. The last members of the family to have lived and died in the house were Edward and Bessie Pierce and their daughter, Rachel, who died of the Spanish Flu when she was two years old. Bessie died in the 1950s, and Edward was found dead in the basement in 1967 after losing the Mansion in a poker game in 1965. Driven by compassion, the new owner allowed Edward to remain in the house as long as he lived in a small room in the basement. His ghost remains and is the reason why the S.K. Pierce Mansion is one of the five most haunted locations in Massachusetts,

In her book Bones in the Basement; Surviving the S.K. Pierce Victorian Haunted Mansion, Joni Mahan describes the activity she witnessed there as well as reiterations of the phenomenon experienced by owners Edwin Gonzalez and Lillian Otero which led to them fleeing their dream house in 2011. The book includes chilling audio EVP clips that attest to the veracity of the many entities still living within the mansion walls.

The mansion hauntings escalated until they resulted in Lillian’s possession by an unknown spirit. Her possession lasted for three days until a friend visited and freed Lillian from possession.

There have been countless local and national paranormal teams investigating the house. And it’s been featured, and the hauntings reported on several T.V. paranormal reality series, including SYFY’s Ghost Hunters and Paranormal Witness and the Travel Channel’s Ghost Adventures. Paranormal experts have said that the entities within this house are the ‘most advanced they have ever experienced because they’re able to harness electrical energy and have the ability to convert that power to impose their will on large objects.

In 2015, the Dark Carnival acquired this property to fully revitalize this once majestic Victorian and restore it to its original grandeur. The Mansion is open to the public for overnight rentals for those who wish to experience the paranormal activity in this grand Mansion during the course of an investigation and understand why the Mansion is one of the five most haunted locations in Massachusetts. Historical ghost tours are also available, where guests can learn about the house’s dark history. During the Halloween season, they plan to open the basement only of the Mansion (weekends only in October) for what will indeed be a one-of-a-kind S.K. Pierce-themed Halloween experience.