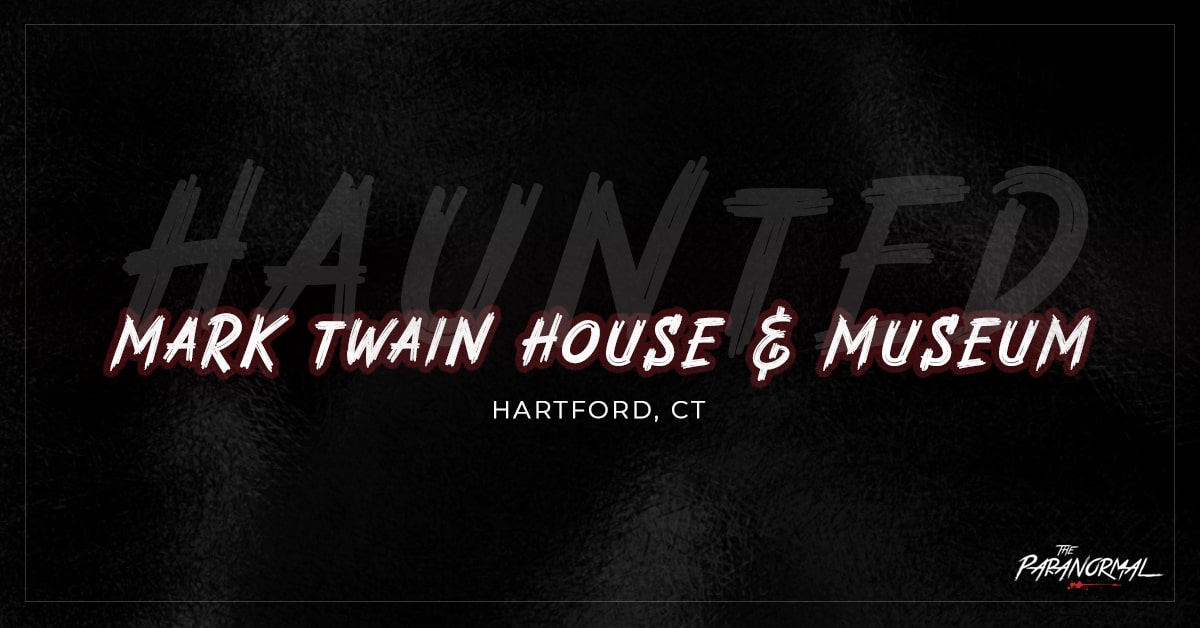 Most people know Samuel Langhorn Clemens as the iconic American humorist and writer Mark Twain. His characters became icons, too. There probably isn’t an individual on the planet who hasn’t heard of at least two of them: Tom Sawyer and Huckleberry Finn. Twain brought these two memorable characters to life with his pen in his American High Gothic-style home in Hartford, Connecticut.

This house is a place of homage to American literature and humor, as The Prince and the Pauper were written here, along with A Connecticut Yankee in King Arthur’s Court being completed here. And some say Mr. Clemens still lives here with his wife Olivia, their daughter Susy, and a servant or two. That’s why it’s one of Connecticut’s five most haunted places.

This 11,000-square-foot home was designed by the New York architect Edwin Tuckerman Potter and was completed in 1874. It contained some of the latest modern innovations of its era, and its 25 rooms spanned three floors. It’s an architectural masterpiece, a work of art in itself. Twain would later say the time his family spent in this house was the happiest and most productive years of his life.

“To us, our house… had a heart, and a soul, and eyes to see us with; and approvals and solicitudes and deep sympathies; it was of us, and we were of its confidence and lived in its grace and in the peace of its benediction.”

Unfortunately, plagued by financial woes and the death of his oldest daughter Susy from spinal meningitis at 24, his residency there lasted only 17 years.

According to reports, tour guides, volunteers, and employees of the Mark Twain house have witnessed paranormal activity there for decades but asked to keep quiet for fear of scaring people away. However, a change in administration reversed the silencing request, and in 2009, the paranormal reality TV show “Ghost Hunters” was asked to perform a formal investigation. Still, you don’t have to be a professional ghost hunter to confirm the paranormal is afoot at the Mark Twain House. Reports of the activity here are frequent, consistent, and undeniable.

One of the most paranormally active places in the Mark Twain House is the billiard room, where Twain entertained friends, dignitaries, and movie stars. It’s also the room where he wrote most of his novels. As a result, some refer to it as Clemens’ ‘man cave.’ The predominant manifestation here is the smell of cigar smoke. Since Twain was as prolific in smoking cigars ( he smoked as much as 40 cigars per day) as he was producing literary masterpieces, the scent is attributed to him. In addition, others have seen swaths of gray smoke in the air.

Another impressive paranormal manifestation in the billiard room is what sounds like pool balls dropping from the table and then rolling across the floor. The noise is loud enough to turn heads, but no pool balls are found when the room is searched afterward. Sometimes, a swift cold breeze rushes past them on their way to investigate.

Staff report that the fire alarm in this room repeatedly goes off, prompting automatic responses from the Hartford Fire Department. When they arrive, no fire or smoke is found, but cigar smoke smells permeate the room.

Financial problems forced Mark Twain to leave his house to tour and lecture in Europe for a few years. His wife, Olivia, accompanied him, and both were still in Europe when their oldest daughter, Susie, contacted Spinal Meningitis and died in the house in August of 1891. Most say she was only 24 years old and extraordinarily close to her parents and two younger sisters. After that, none of the Clemens family ever returned to the home.

Many say they’ve seen Susy’s spirit wandering the house, always dressed in a white nightshirt. And although picture taking isn’t allowed inside the house during tours, one person took a picture of the outside of the house. When they looked at the picture, a woman and young girl dressed in period clothes stood in an upstairs window. No staff was upstairs at the time, and it’s believed the two individuals were the ghosts of Mrs. Clemens and Susy.

One woman on the house tour believes Susy’s spirit possessed her. The woman is Hispanic and, according to her niece, didn’t speak a word of English. Pushed against the wall by an unseen force, the tour thought she was having a seizure until she began to speak in an American accent about ‘looking for momma’ and ‘getting out of here.’

It wasn’t until later the museum received a letter from the niece explaining that her aunt said she felt like someone had taken possession of her body. However, she again reiterated that her aunt didn’t know a word of English and attributed the episode to a paranormal event.

It’s apparent just Susy, and Mark Twain’s ghostly activity alone would make The Mark Twain House one of the five most haunted places in Connecticut, but there’s much more.

Other Paranormal Evidence and Activity

Not all paranormal evidence at the Mark Twain House can be directly attributed to a particular departed family member. Still, other evidence and reported activity abound:

A trip to the Mark Twain House and Museum is for anyone interested in literature and history, but it’s a must-see for those passionate about the paranormal. Reported activity is so prevalent here that you don’t have to be a professional investigator to experience it; simply take a guided tour of one of Connecticut’s five most haunted places. You’re bound to see or hear something out of this world.